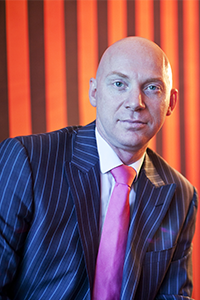 Chef David is an advocate for cruelty free and sustainable ingredients and is a firm believer in letting the ingredients speak for themselves. He creates a broad spectrum of flavour profiles drawing from his global travels and love of ethnic cuisines. Davids culinary creations are a combination of the classic married with the contemporary, his approach to avour pro ling is more driven by his imagination than the conformity of the expected but also aesthetically real.

Arriving in Shanghai in 2003, he launched his namesake restaurant Laris at Three on the Bund designed by Michale Graves, which quickly became a landmark in the city’s contemporary fine-dining scene and has been credited with being one of the founders of the western dining scene in China. Laris later created a variety of exciting new concepts for the local market, bringing everything from Greek, Italian, Mexican, Healthy as well as bars and retails products, Laris founded one of the first independent Chocolate shops in China not to mention the creation of Le Sheng, a modern Shanghainese restaurant that won Best Shanghainese Cuisine in Shanghai two years in a row.

Besides his own restaurant creations, Laris has developed original food and beverage concepts for many renowned international brands, including Baccarat, Chanel, Dolce & Gabbana, Dunhill, and most notably Swire Hotel Group. In 2012, Laris was instrumental in developing multiple F&B brands for the Swire Group including the award-winning Bei and Sereno at properties in Beijing, Hong Kong and Chengdu. Laris’s work keeps him constantly busy in cities all over the globe and has continued to leave his mark on home cities including Shanghai, Beijing, Hong Kong, Macau, Hanoi, London and Sydney and now is spending time developing new products for the US and Mexican markets.

Business aside, Laris has also been a actively involved in philanthropic activities for non-profit organisations. He is also a spokesperson for The Strawless Ocean.

The ideal essay providers have recently gained adequate fame for pupils to own earned the eye of several faculty and university campuses. Those who are trying to get a way to generate a little excess money should consider selling their own written essays to these companies. In the event the procedure is uncomplicated, one will earn $200 per hour and sometimes more depending in their skill. There certainly are a few points to stay in mind while attempting to sell the essay to these companies. It is vital that you research and assess with the businesses to ensure they will pay for the informative article they’ve been buying and maybe never pocketing the tuition fee.

Thank you for your interest in Cachet Hotels! We've recorded your request and we will get back to you within 24 hours.

There was an error submitting your request, please try again later